Our March visit was to the church of St Edward the Confessor at Sudbrooke.     As we entered the building there is an immediate impression of light which I found very inspiring and uplifting.

The remains of a very substantial capital from a pillar probably from Barlings Abbey is the most interesting item of architectural interest.  The church also has some very nice stained glass windows. 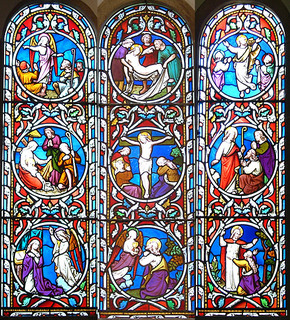 Three of the stained glass windows

Sudbrooke church is generally thought to have been of Norman foundation but it is not mentioned in Domesday Book and was probably served by the Canons of Barlings until the Abbey was suppressed in 1537. No traces of the early church have survived and by the eighteenth century it was reduced to a small red brick building.

By 1860 extensive repairs were needed and the church was rebuilt in stone, in the Norman style as a memorial to Richard Ellison, who had left £2000 for this purpose. The Ellisons were Lincoln bankers who lived at Sudbrooke Holme which was demolished during the 1920s.

The new church was completed in 1862 to a design by John Dobson who was inspired by the church at Steetley in Derbyshire.

Back to Past Visits Main Page.