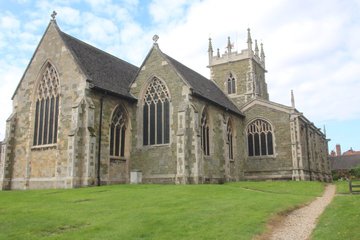 Our August visit was to St. Wilfrid’s church in Alford. The church stands on a mound, with an impressive tower topped with decorative pinnacles. We were given a warm welcome by Rev. Ros Latham who introduced us to one of the Needlecraft ladies who told us about the beautiful tapestries depicting scenes from the local community which displayed a variety of sewing techniques. The Tapestries hang on the pillars around the church . The ladies had previously sewn 200 kneelers representing people and some of the town’s organisations. 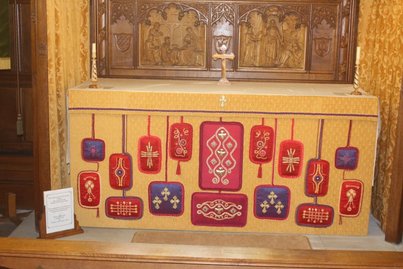 The church dates back to 1350 and has a beautifully carved 14th century wooden screen and a carved Jacobean pulpit. The south porch leads to the Parvis Room which we approached by a narrow stone spiral staircase. Inside was a small schoolroom , apparently it was the first grammar school in the town during Elizabethan times. It is believed John Smith ,who was saved from death by Pocahontas and became Virginia’s first governor was an ex pupil.

Outside we saw some of the damage the masonry bees had done to the sandstone tower. As the church is grade1 listed the stones have to be replaced with sandstone under the instruction of English Heritage.

There was a strong community feeling to the church with 300 people attending the recent service to commemorate the First World War and wreaths made by the Primary school children were lying in the porch.

I am grateful to Linda Durance for the text and to Max Kitchen for the photos. JRK

Back to Past Visits Main Page.